Navigating through human crowds is a tough challenge for a robot. Crowds can cause severe sensor occlusions and often don’t leave much free space for the robot to move in, leading to what’s known as the « freezing robot roblem ». Our goal in CROWDBOT is to develop navigation and motion planning algorithms that allow the robot to work with the flow of the crowd to get to its destination.

Robot-crowd navigation is more than just following a pre-computed path. We need to consider the changing movements of the crowd as a whole as well as the interactions of the individual pedestrians with each other and with the robot. This means that we need to make motion plans that operate at different time scales. Short-term motion needs to ensure safety and compliance with the immediate crowd around the robot. On the other hand, long-term motion plans can decide when and how to engage with different groups of pedestrians within the crowd, e.g. by detouring around, following or inching through.

We’ve all heard of autonomous systems (self-driving cars etc.), but in some cases fully autonomous systems aren’t really what the users want. For example, most wheelchair users do not want to be treated simply like precious pieces of cargo and ferried around automatically from point A to point B. Instead they want to be empowered to get around by themselves so they can continue with their activities of daily as independently as possible. However, there are some instances when environmental barriers such as narrow passageways, rough terrain and indeed crowds of oblivious pedestrians rather hamper their efforts. In cases such as these, we propose a “shared control navigation”, whereby the wheelchair itself is able to actively assist the user in safely and efficiently maneuvering through these difficult situations, without taking away their overall control authority. It is important to note that every individual is unique, so any such shared control system should be able to adapt to the needs and capabilities of that particular user. 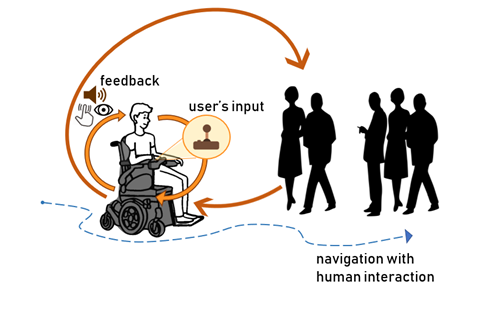 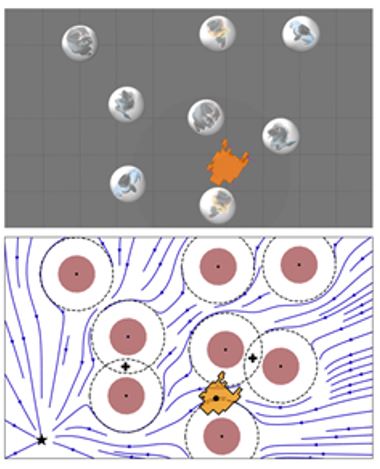 In terms of crowdbot navigation, a robot requires fast and safe methods for ensuring collision avoidance under normal operational conditions. The term reactive navigation refers to the ability to operate normally when dynamic obstacles surrounding the robot behave outside of any planner predictions.

For these situations, we have developed a dynamical system based approach where an initial linear dynamical system (desire motion giving by a high-level planner) is modulated around obstacles. The modulation works in real-time and dynamically around any number of obstacles. This work has been proven theoretically for convergence towards an attractor, as long as intersecting obstacles can be described with a star shape.