The objective of CrowdBot is to allow our robots to move in a safe manner in a crowd. This challenging task is about designing inherently safe robotics platform, and steer them by coupling robust algorithms shown in the following figure. 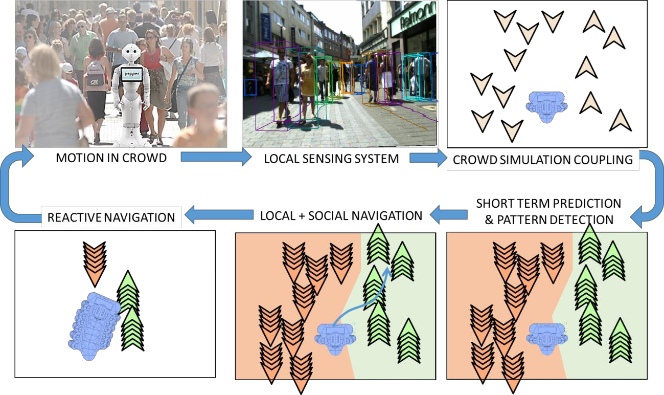 In CrowdBot, we follow recommendations by the RoboLaw project that “the best approach [is] to undertake a case-by-case analysis” and propose to undertake a detailed evaluation of the risks related to the use of autonomous mobile platforms in crowded environment. However, we have narrowed this analysis to the four CrowdBots robots. In doing so, we complement and expand the RoboLaw’s case analyses that were restricted to autonomous cars, robots for surgery, prostheses and robots for care.

We take a different approach in that we consider that contact of the robot with humans may not necessarily be detrimental but rather that they may be required to ensure that the robot does not stop the fluidity of the crowd movement. Yet, these contacts must be treated with care and must remain safe for all humans involved.

In concrete terms, our robots have been adapted or specifically designed to ensure safety: force sensors, compliant design, contact sensors, smooth edges, etc. Also, the robustness of the solution is tested in a controlled environments (simulation or controlled experiment) to ensure a actual safe navigation.

While prevention is key to safety, unexpected events might occur in a crowd. The navigation task have been thought to be robust to such events. We implemented different navigation strategies: local autonomous navigation, social navigation, shared controlled navigation, reactive navigation, etc.
Each of these techniques are robot dependant, and situation dependant, but a high-level multi-mode allows our robots to adapt their current strategy to the context.

Apart from (one or two) Lidar sensors and RGB-D cameras cuyBot includes multiple sensors to register contacts with objects or humans. The robot’s outer hull is mounted via force sensors on the main chassis of the robot. If the outer hull collides with anything, it generates a signal on these sensors. In addition there are multiple capacitive sensors which detect close proximity to a human. Also the novel wheel units used on the robot (SmartWheels) enable the detection of external forces acting on the robot to some degree.

Additionally, the CROWDBOT Pepper is equipped with a custom sensor suite which includes two 2D SICK TiM571 LiDARs mounted on a base ring at the base of the robot to provide high resolution range data for mapping and obstacle detection. The ring itself is attached to Pepper’s base via three 3D printed connectors that conform to the curvature of Pepper’s base and provide a horizontal mounting surface. Also, an Intel RealSense D435 depth sensor was included due to its versatility and field of view, such sensor was integrated using a head mount developed in the H2020 European Project MuMMER (MultiModal Mall Entertainment Robot).

We consider a modified Salsa M2 Quickie wheelchair platform augmented with sensors to create a smart wheelchair that is capable of shared control navigation. Our design considerations account for long range, proximity, and contact sensing to ensure the safety of the wheelchair user and nearby pedestrians.

A 3D CAD model of the smart wheelchair (showing placement of the Hokuyo lidar, RGBD camera, bumper contact sensors, and ultrasonic clusters with time-of-flight sensors) is shown below (see figure below). 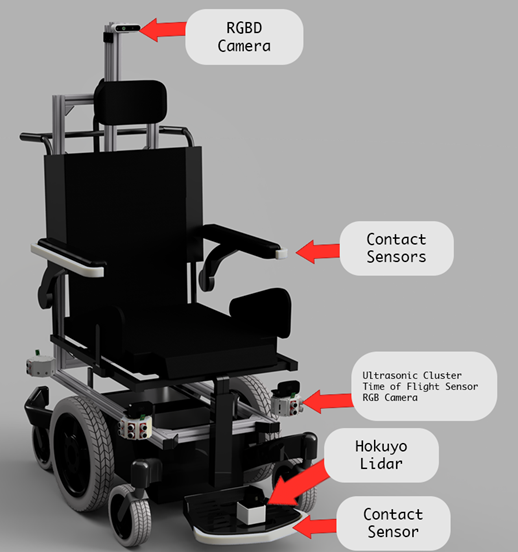 In this work, we focused on the identification of foreseeable hazards when a robot navigates in crowded environments and/or engage in social interaction with pedestrians. We developed a list of hazards considering both physical as well as psychological harms, all detailed in D6.1. With respect to physical contacts, we distinguished them into “intended” and “unintended”. We further divided contacts into “from robot to human” and “from human to robot”. The types of physical contacts identified include collision, squash, push, swipe, drag, and touch. As far as psychological hazards are concerned, we considered potential harms deriving from robot presence, appearance, motion, physical contacts, and social capabilities. In addition, in collaboration with the Crowdbot robots’ designers, we performed a preliminary risk estimation exercise with respect to the physical and psychological hazards related to powered wheelchairs, the Pepper robot, and the cuyBot.

In the framework of this work, the Ethical and Safety Advisory Board (ESAB) has been activated and two teleconference meetings organized in order to discuss the crowdbots scenarios and the ethical and legal implications of crowdbots. The role of ESAB is to advise the consortium on risk assessment of project experiments; design of ethical protocols and available standards.