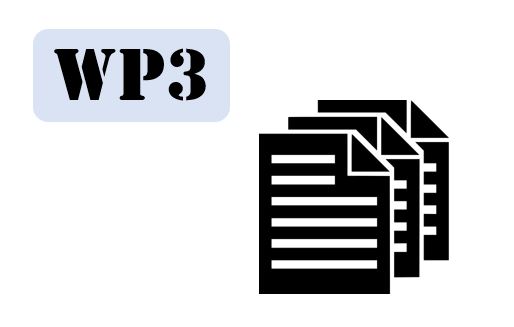 This report details the reactive navigation techniques developed for the CrowdBot project between months M1 to M30. In this sense, we have investigated three main technical components for achieving reactivity in different types of mobile or service robots when navigating in crowded environments.
Each of the three technical components are designed to complement high-level planning techniques and focus on exploiting different sensing capabilities of the different robots. In this report, we present tests in both simulation and real environments showcasing the applicability of the proposed solutions for dynamic environments..

In particular, the three key challenges that we addressed are:

For proximity based solutions to the reactive navigation problem, we present two approaches. The first solution is based on a dynamical system (DS) representation of the robot’s control input and its environment (obstacles) offering a continuous solution in closed-form equations of harmonic potential flow around multiple moving obstacles, as such, enables the robot to react immediately to dynamic obstacles. This approach was implemented both in simulation and on a wheeled omnidirectional robot and validated for holonomic robot control in 2D space, effectively controlling the robot direction and velocity in a plane. Further details are described in section 3, and the open source code is available at: https://github.com/epfl-lasa/dynamic_obstacle_avoidance_linear .

The second approach focuses on non-holonomic (limited motion capabilities as wheelchairs) and non-circular robots, providing a solution to complement high-level planners and navigate tight environments with accurate robot shape descriptions. This would be an advantage for robots whose shape would be over increased if a point-mass approach were to be used. The proposed method formulates a convex optimization problem for representing the robot with accurate shapes, offering a reactive response that assumes a coupling with a higher level planner (navigation algorithm or human driver); extending the method of velocity obstacles (VO). This approach is validated in both simulation environments and real robots with the CrowdBot robot Qolo which has similar kinematics to standard powered wheelchairs. Further details are described in section 4, and the open source code is available at: https://github.com/epfl-lasa/rds. Finally, post-collision reactivity was investigated through the concept of compliance control for achieving a directional compliance to unexpected collisions that would minimize the collision force without forcing the robot to freeze. We present a method for estimating contact forces at the robot’s surface through learning nonlinear stiffness and compliance to internal force torque sensors. Then estimated collision location and magnitude is used in a continuous compliant controller that cancels the contact forces in a closed-loop system.  Further information is detailed in section 5.